Have We Already Gotten Over Charlottesville?

What happened in Charlottesville last month horrified many people in this country: Nazis marching alongside the KKK on the streets of America; street-fighting; terrorism. There was an outpouring of righteous indignation, much as there was after the shooting of nine black people by Dylan Roof in a Charleston church.

Debates raged over whether or not President Trump was right to draw attention to violence on the part of “both sides.” Are soviet-flag-waving, anti-fascist activists worthy of the same denunciation as Nazi-flag-waving, white supremacists? Is it legitimate to respond to violence with violence?

But now we have moved on. After all, we have been here before. This is the stuff of which PBS documentaries are made, though in the past they have usually been in black and white.

To be sure, much has changed. I am glad that overt racism receives such sharp denunciation by the media and by many Christians today. And yet, what bothers me is how eagerly we as a nation denounce overt white supremacy, even as we blissfully ignore the more subtle racism that permeates our cities, courts, and prisons. This has far more destructive consequences for black people than a hundred rallies similar to Charlottesville’s.

The sheer vitriol of our denunciation belies our own complicity in racial injustice for which we are so desperate to atone. We forget that even during the 50s and 60s many respectable white Christians, even in the South, abhorred violence and disorder.

Many white moderates love to signal our virtue by condemning violence and calling for the removal of Confederate monuments. Meanwhile, we go back to our comfortable white suburbs, built with help from federal, state, and local governments during waves of white flight. We go back to our good jobs, our safe schools, and our stable investments. All the while we forget how racial discrimination systemically prevented African Americans from building the same sorts of lives, leaving millions trapped in poverty to this day.

Read the rest of this article at the Reformed African American Network.

Comments Off on Have We Already Gotten Over Charlottesville?

What Does the Gospel Have to Do With Racism?

What does the gospel have to do with racism?

This evening, from 6:45-8:00pm I will be gathering online with Rev. Shiao Chong of The Banner Magazine​, Dr. Michelle Loyd-Paige of Calvin College​, and Rev. Reggie Smith of the Office of Race Relations and the CRC Office of Social Justice​ to discuss this question. You’ll be able to listen in on the conversation and comment through the Office of Race Relations Facebook page (www.facebook.com/crcracerelations/). 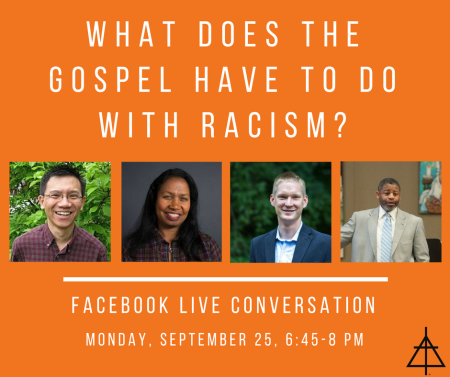 Comments Off on What Does the Gospel Have to Do With Racism?