Is Women’s Modesty the New Legalism Among Christians?

[Note: This article originally appeared on this blog on July 26, 2012. When I originally published it there was some controversy, as a number of people feared that I was in some way promoting  antinomianism. Such is not the case, at all. Here is a sermon I preached on Jesus’ warning against lust in Matthew 5:27-30.]

Contemporary America is one of the most sexualized cultures in the history of the world. Sex is everywhere, no matter how hard you try to avoid it, and the objectification of women in virtually every form of media is a commonplace. In this context, it is easy to see why many Christians react by placing tremendous stress on women’s modesty, not only in principle, but in terms of a system of rules and practices designed to cover and obscure the skin and curves of a woman’s body. In certain conservative circles the rhetorical and moral condemnation of those women who do not conform to the strict (and sometimes arbitrary) standards of others is quite intense. In many ways it is analogous to the fundamentalist approach that Christians took toward alcohol in the early twentieth century. The cultural problems caused by drunkenness and strong liquor were tragic and required a response, but the response of many Christians was more legalistic than realistic, more about control than about the gospel.

Of course, the problem with an issue like modesty is that one can always take a stricter, more modest position than the next person. Person A says women should always wear skirts, never pants. Person B says women’s skirts should always extend below the knees. Person C says women should never show their ankles or hair. Person D says why not just put on a burqa? Men don’t lust after women in burqas (or do they?). On the other hand, once one opens the door to Christian wisdom and liberty, where do you stop? In some cultures women freely show their breasts, even in church. Even in Victorian England it was suitable to show significant cleavage but not your ankles.

The Christian rule of chastity must not be confused with the social rule of ‘modesty’ (in one sense of that word); i.e., propriety, or decency. The social rule of propriety lays down how much of the human body should be displayed and what subjects can be referred to, and in what words, according to the customs of a given social circle. Thus, while the rule of chastity is the same for all Christians at all times, the rule of propriety changes. A girl in the Pacific islands wearing hardly any clothes and a Victorian lady completely covered in clothes might both be equally ‘modest,’ proper, or decent, according to the standards of their own societies: and both, for all we could tell by their dress, might be equally chaste (or unchaste)…. When people break the rule of propriety current in their own time and place, if they do so in order to excite lust in themselves or others, then they are offending against chastity. But if they break it through ignorance or carelessness they are guilty only of bad manners. When, as so often happens, they break it defiantly in order to shock or embarrass others, they are not necessarily being unchaste, but they are being uncharitable. (83-84)

Often lost in all of this is that when the New Testament talks about modesty it is always concerned about women who put too much emphasis on their clothing, jewelry, and hair, forgetting that what it means to be a Christian woman is about godly actions that stem from the heart, not about what one wears. If anything, Paul’s writings show that he was concerned about wealthy women drawing too much attention to themselves through their physical adornment. Throughout much of human history, and one sees this in the descriptions of the adulterous woman in Proverbs as well, sexual immodesty had to do with the kind of clothing and makeup a person put on to draw attention to herself, not with the showing of skin. And Jesus puts the burden of preventing lustful thoughts on Christian men, not on Christian women.

I am not saying women should dress provocatively, or that it is acceptable for them to show as much skin as possible. I am suggesting that there is nothing inherently immodest about showing the skin on most parts of the human body or about wearing clothing that accentuates certain curves. As Christians we should be careful not to commit the Muslim mistake of thinking that we need to hide a woman’s body in order to make life easier for men, or that feminine beauty is something that we should flee from and avoid rather than celebrate and enjoy. The problem is with the human heart (lust) and the actions that spring from it (sexual immorality and adultery), as Jesus made quite clear to the Pharisees who were prone to their own forms of legalism. It is not with women, or with the bodies that God has given to them.

One of the most helpful set of posts I have seen on this is by Rachel Miller at her blog, A Daughter of the Reformation. As Miller writes, responding to a post on another blog praising the merits of women wearing skirts,

Skirts are not inherently more modest than pants. Modesty is much more an issue of the heart than simply what a woman wears. A skirt can easily be provocative, and it’s not hard to be modest in pants, or shorts, or even a swimsuit. And, there is a real danger for many women to become self-righteous over their choice of clothing.

Miller illustrates her point with a clever set of pictures. The link in the quote leads to a more substantive post she wrote on the issue. There she writes, 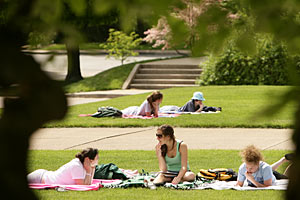 Noting the relevant biblical passages, she goes on with reference to 1 Timothy 2:8-10,

While we could certainly get into a debate about whether women should braid their hair or wear jewelry, I think the point Paul is making here is that godly women should not worry so much about their outward appearance, but they should concern themselves with living godly lives. Our love for God and His love for us should make us care more about what He thinks of us and less about what the world around us thinks.

This is a very freeing concept. Women and girls who know that they are loved by God, not for anything they’ve done or anything they are, but solely because He has chosen to love them, are freed from the constant struggle for acceptance by the world.

One might add that it frees Christian women from the constant scrutiny of those to the right of them on the modesty spectrum.

Here again the comments of C.S. Lewis are helpful:

I do not think that a very strict or fussy standard of propriety [i.e., modesty] is any proof of chastity or any help to it, and I therefore regard the great relaxation and simplifying of the rule which has taken place in my own lifetime as a good thing. At its present stage, however, it has this inconvenience, that people of different ages and different types do not all acknowledge the same standard, and we hardly know where we are. While this confusion lasts I think that old, or old-fashioned, people should be very careful not to assume that young or ‘emancipated’ people are corrupt whenever they are (by the old standard) improper; and, in return, that young people should not call their elders prudes or puritans because they do not easily adopt the new standard. A real desire to believe all the good you can of others and to make others as comfortable as you can will solve most of the problems. (84)

Again, the point is not that women should wear whatever they want without thought to modesty, or that they should dress provocatively. The point is that we should be very careful not to make arbitrary external rules our obsession, rather than the heart and the actions that stem from it, and that we should be careful not to fall into the trap of implicitly viewing women and their bodies as evils that are to be avoided or hidden. As a virtue of the gospel, modesty calls us to sanctify our hearts even as we celebrate that what God has made, including women created in his image, is very good.

[Note: the C.S. Lewis quotes have been added to the original version of this post]

Posted on May 16, 2013, in Uncategorized. Bookmark the permalink. Comments Off on Is Women’s Modesty the New Legalism Among Christians?.