Keeping the Two Kingdoms in Perspective: Calvin on the spirituality of all of life

One of the crucial principles of a biblical two kingdoms doctrine is that the two kingdoms do not correspond to two realms or spheres into which life can be divided. Rather, they correspond to two ages (the present creation and the new creation) and to two governments (the word and Spirit and the sword) that overlap in daily life. Versions of the two kingdoms perspective that improperly emphasize a contrast of the internal and the external, or the soul and the body, run into problems with the New Testament diaconate. Versions of the perspective that place too much emphasis on the contrast between the institutional church and the rest of life find themselves in contradiction with the New Testament’s emphasis on the spiritual significance of all Christian activity.

One of the places in which Calvin makes this point most clearly is in his commentary on Galatians. He is commenting on Galatians 6:8-10, in which Paul writes:

Calvin notes that Paul’s exhortation demonstrates how Christians are constantly to conduct their lives with an eye to the future, or spiritual, implications of what they are doing. In the process, he makes three points that help clarify the sense in which this is true.

First, he defines sowing to the Spirit in terms of “the spiritual life, to which they are said to sow whose views are directed more to heaven than to earth, and whose life is regulated by the desire of reaching the kingdom of God.” Note here that when Calvin contrasts heaven and earth he is not contrasting the immaterial with the material, but rather the future kingdom with the present evil age. Christians, he emphasizes, are to do everything that they do with the coming kingdom in view.

Those [spiritual] employments are denominated spiritual on account of their end, though in some respects they are external and relate to the body, as in the very case now under consideration of supporting pastors…. Let no man, from a wish to gather the fruit in this life, or before its proper time, deprive himself of the spiritual harvest. The desires of believers must be both supported and restrained by the exercise of hope and patience.

Clearly Calvin rejects any simplistic distinction between spiritual activities and earthly activities, not because he is uncomfortable saying some actions and things are temporal, but because he rejects the notion that Christians should engage these things without any reference to the coming kingdom. For Calvin, like contemporary two kingdoms advocates, treating temporal things as if they are ultimate is idolatry. But for Calvin, unlike some contemporary two kingdoms rhetoric, engaging temporal things as if they have no relation to the future kingdom at all is just as problematic. As Calvin puts it with reference to Christian liberty, many things are indeed indifferent (or adiaphora), but that does not mean Christians should use them indifferently. All Christian activity must be conducted to the glory of God and for the love and edification of one’s neighbor. 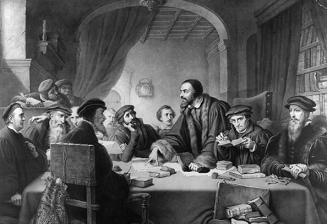 Third, Calvin emphasizes that the spiritual significance of our actions is more acute or defined in some instances than in others, but he notes that Paul nevertheless does extend his point to all actions of well-doing towards others.

Well-doing does not simply mean doing our duty, but the performance of acts of kindness, and it has a reference to men. We are instructed not to be weary in assisting our neighbors, in performing good offices, and in exercising generosity…. Since, therefore, God has set apart the whole of the present life for plowing and sowing, let us avail ourselves of the season … Beginning with liberality to ministers of the gospel, Paul now makes a wider application of his doctrine and exhorts us to do good to all men, but recommends to our particular regard the household of faith, or believers, because they belong to the same family with ourselves. This similitude is intended to excite us to that kind of communication which ought to be maintained among the members of one family. There are duties which we owe to all men arising out of a common nature, but the tie of a more sacred relationship, established by God himself, binds us to believers.

Don’t let the emphasis on service to those in the household of faith (one’s ‘immediate family’, so to speak) distract you from the more basic point. Calvin clearly believes that Christians are to conduct all of their affairs with an eye to the coming kingdom of Christ. This means using the things of this age not for one’s own temporary benefit, but for the edification of one’s neighbors. Temporal actions are spiritual for Christians both because they point to the justice of the coming kingdom and because they carry with them eternal rewards.

Getting this balance right is one of the most difficult, yet important tasks of the Christian life. People are constantly tempted to make their families, their jobs, or their politics ultimate; they want to speak of these things as if they are the stuff of the kingdom itself. On the other hand, the temptation to be reactionary, to simply belittle the relevance of the kingdom to these matters, is always present. Look through church history and you will find Christians erring on both sides in dangerous and tragic ways. Our goal should not simply be to avoid the particular mistake of someone else who gets it wrong; our goal should be to get the Christian life right.

Posted on January 4, 2013, in Calvin, Christian liberty, Christian Life, Two Kingdoms. Bookmark the permalink. Comments Off on Keeping the Two Kingdoms in Perspective: Calvin on the spirituality of all of life.